Funniest Things People Have Reported Hearing While Punting in Cambridge

Funniest Things People Have Reported Hearing While Punting in Cambridge 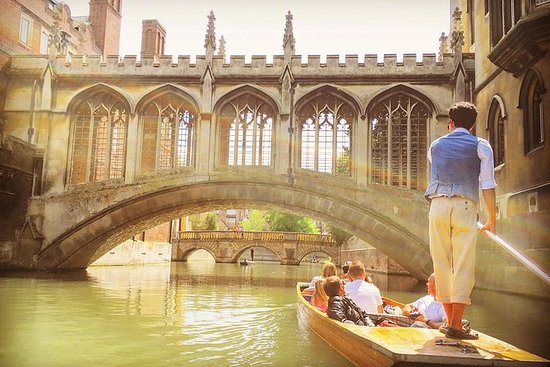 If you have been wanting to take a boat ride in scenic England, nothing beats punting in Cambridge. Cambridge has plenty of history and cultural traditions, and it is one of the most famous cities in the world because of its University.

However, what you might not know before booking punting in Cambridge is that the conversations and utterings between people are also famous, even if that is on a smaller scale.

Your tour might be a crazy adventure because people say the funniest things.

Here are some examples that will make you go, “Wow, that is such a Cambridge thing to say.”

This was overheard on a Cambridge punt by tourists who could not stop laughing while a child begged their dad to avoid feeding the geese some alcohol. Pimm’s is a gin-based spirit that is made with orange and warm spices. Even though this is a delicious drink to have onboard whilst punting in Cambridge, it is certainly not meant to be shared with any geese.

Famously among punting companies, there is a Pimms boat that frequents the River Cam during the summer months.

If you are punting in Cambridge during the summer be sure to check it out.

“Punting in Cambridge Is the Poor Man’s Gondola Ride.”

To some, a Cambridge punt may not seem as luxurious as going on holiday to Italy. Although gondola rides are still affordable for many tourists, they were a method of transportation for only the elites and upper-class living in historical Venice.

However, it is the journey to Venice from England that also adds on to the overall cost, which is why many wealthy people can take the plunge faster than others.

There are no significant differences between both experiences.

A gondola ride has the reputation of being a one-of-a-kind romantic experience, but Cambridge punting is catching on too.

You can hire a private punt for you and your partner, and ride into the sunset with champagne and strawberries on board.

Like a punt, a gondola is also a flat-bottomed wooden boat driven by “Gondoliers” instead of “Chauffeurs.”

There is no requirement for a gondolier to sing like they do in the movies.

Chauffeurs who transport tourists in Cambridge do not have a strict uniform and are often students studying at the university.

Gondoliers wear striped t-shirts with red, white, or black colours. Punts have a natural wood colour, but gondolas are all painted in black due to a law that goes back to the 16th century.

These were comforting words that were overheard outside Christ’s College.

Christ’s College is part of Cambridge University, and you can see it during your punting in Cambridge tour.

The college was founded by William Bingham back in 1437 as “God’s House.”

Charles Darwin and John Milton were some of the most famous alumni of this college. Sacha Baron Cohen, who plays Borat, studied at Christ’s College too.

The college is an essential landmark at the university, which is why one must always keep their moustache in good shape whilst punting in Cambridge.

“There Is So Much Latin In This City, You Wouldn’t Even Think You Are in England Anymore.”

The city of Cambridge has a lot of fascinating history, and that is why many tourists flock here to explore the University and all its glory.

However, some people might struggle to go back to history.

Latin was initially used by ancient Romans, and a significant portion of the English vocabulary has been derived from Latinate and Romance sources.

Nearly 70% of English words are inspired by Latin.

For example, “Cantabrigia” is the old Latin name for “Cambridge.”

Every part of Cambridge consists of historical wonders. Even if you dislike Latin, there is so much to learn about this city because it has a very special place in England’s heart.