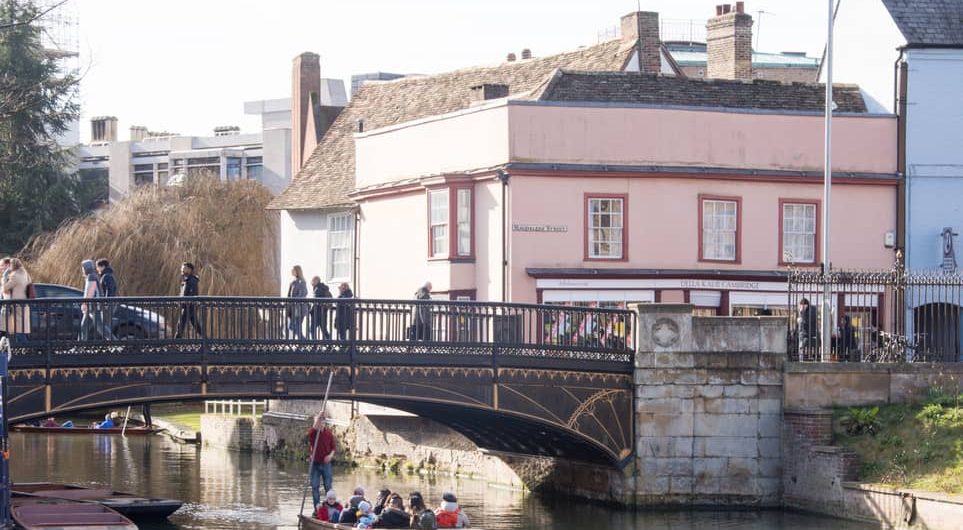 Compared to other River Cam bridges, Magdalene Bridge in Cambridge isn’t a popular bridge. But, the bridge plays a vital role in the history of Cambridge city. The explicit architecture hidden underneath the eminent bridge is worth a watch.

This majestic bridge adjacent to the Magdalene College Cambridge is the only River Cam bridge potential to carry any transports, including the public transport buses. It is the most prominent public bridge.

A rejuvenating punting Cambridge trip allows us to sink into the history of this lofty bridge. Punting through the River Cam rewards us with a unique yet invigorating experience, adding to its popular demand. Moreover, a Magdalene College Punting trip is more convenient as it offers a parking lot too at Quayside. And, in this punting, it is the Magdalene Bridge that you witness both at the start as well as at the end of your punting trip.

A Glance into the Past

During the Roman reign, the Magdalene Bridge, monikered as Cam Bridge, marked the only entrance into the city. Thus, this bridge witnessed the city’s advancement from the very beginning and played a crucial role in the trading and sustainability of the city. A popular myth suggests that the city got its name from the bridge. However, the city’s name was officiated upon the river meandering in the city’s heart, The River Cam.

The bridge is an illustrious link between East Anglia and London, dating back to Roman times, and it is still continued. There was a time when every route converged at this crossing point. However, the irony is the evolution of the bridge for the past centuries.

The first model of the site was accomplished with wood, up until 1754, when architect James Essex re-constructed the bridge stone for the first time. However, it was rebuilt twice before that with wood.

The first-ever cast iron Magdalene Bridge also called the ‘Great Bridge’, dates back to 1823 when the Norwich architect Arthur Browne designed it. The bridge was a single span of cast iron with iron railing decoration resting on ashler piers. It became a Grade II listed structure in 1969. The current Magdalene Bridge is the structure repaired and strengthened in 1982 by Browne itself.

With the proximities to the foundations of Magdalene College, the bridge was titled Magdalene Bridge. The paradox hidden in the name’s pronunciation is that it is actually pronounced ‘Maudlin Bridge’. The logical naming introduced many historical facts to this bridge. The bridge contributes an inevitable role in the stories of the Magdalene College and Cambridge University.

The Magdalene Bridge stands out among the first sites to cross the River Cam. It serves as a prominent role trading route and enhances the city’s survival. While punting from north to south, the bridge is followed by the Bridge of Sighs, another architectural masterpiece.

Above all, this extensive bridge, notably near the River Cam, is unique in its features. The ingenious ridges underneath the bridge that aid punters to propel themselves along the river impart uniqueness to the structure.

The college resides on the River Cam banks on an idyllic spot adjacent to the dynamic Quayside. Summer in Magdalene is a popular hangout for students and locals to relish the view while sipping a beer or wine.

The college dates back to 1428, known as Buckingham College; it was originally a Benedictine hostel for student monks. The structure was deliberately located to the north of the river to detach the monks from the sinful temptation of city life.

In 1542, the college was named St. Mary Magdalene after St. Mary, a devoted biblical character. The odd pronunciation of Magdalene is said to be derived from one of the college benefactors, Thomas Audley.

The college set out history by being the first college to admit Jewish and Asian students. However, it is the last all-male college in Oxford or Cambridge as it accepted women students in 1988; it was the final college to admit girl students. Although there was a high objection from the male students in admitting the females, they were proven wrong with the increment in grade average in the following years. In addition, only the female alumni of Magdalene contributed Nobel prizes to the college.

The bridge used to be crowded every year on May 1, from dawn, for Oxford’s May Morning celebrations. The recent tradition among the students was to jump off the bridge, despite the injury from low water levels in the Cherwell. When the injury traffic rose in subsequent years, the bridge routinely closed on the later May Morning.

Thus, the majestic Magdalene Bridge plays a vital role in the history and aesthetics of Cambridge city. Although all the 25 bridges(soon to be 26) have a remarkable role in the city’s unique appeal and economy, Magdalene serves both the students and the public equally, thereby adding popularity in function.